Dior Under Pressure on Weibo for Cultural Appropriation of Chinese Traditional Clothing? 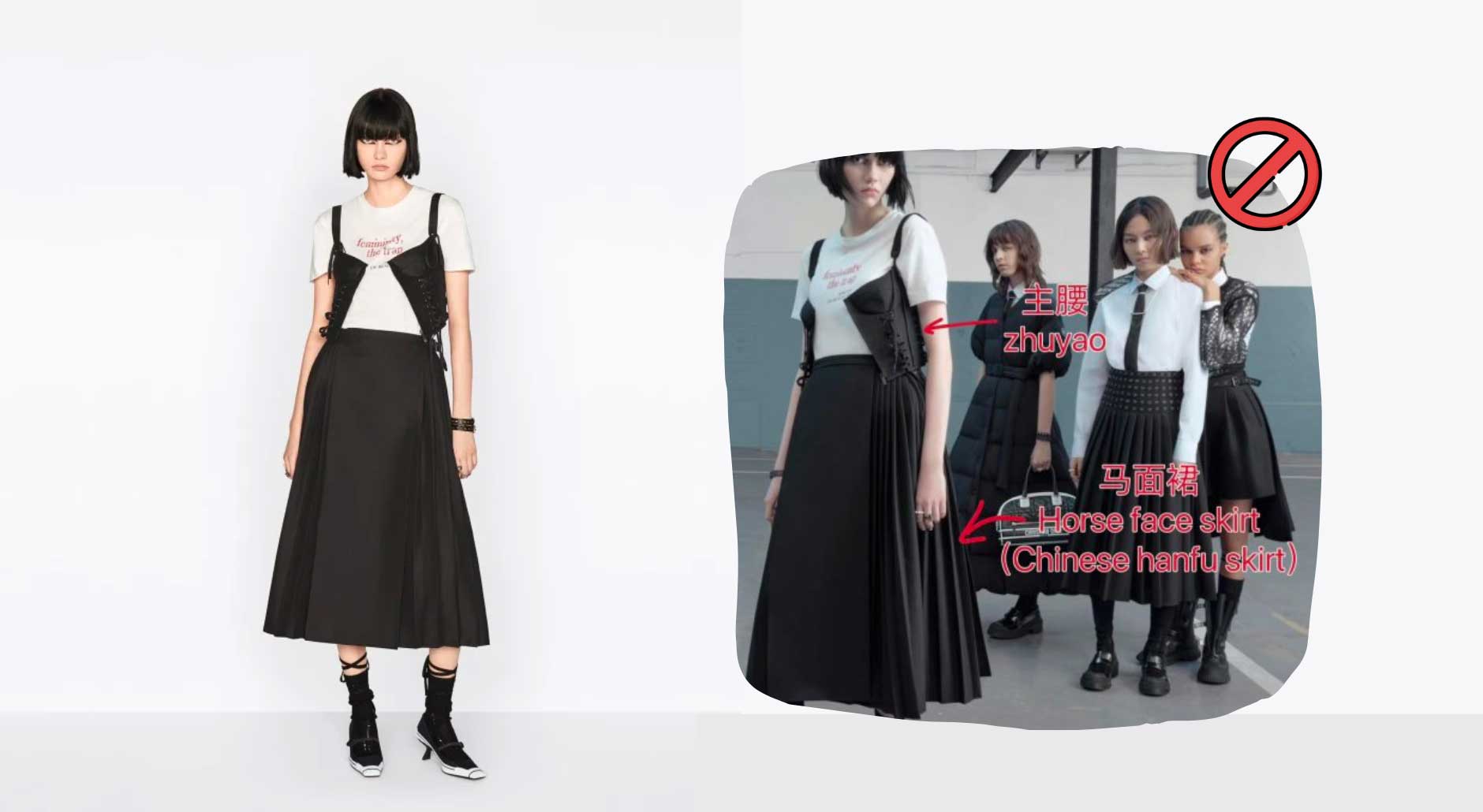 Most of the Chinese netizens on Weibo are saying that this is naked cultural plunder. The incident started when a Chinese costume lover discovered that Dior’s new fall dress was very similar in design to the traditional Chinese dress, the “horse-face skirt”, which was indeed featured on Dior’s website as “This half-skirt is a new elegant and stylish piece in the iconic Dior silhouette.

This is a new elegant and fashionable item with the iconic Dior silhouette.” This claim is considered “cultural appropriation”, “plagiarism” and “cultural plunder”.

“马面裙Mamianqun”， as one of the skirt styles of the Han Chinese in ancient China, there are four skirt doors in the front and back, inside, and outside, overlapping two by two, with the outer skirt door decorated and the inner skirt door less or no decoration. The middle skirt overlaps to form the light surface, the so-called” Mamian”.

Historically, the Mamian skirt originated in the Liao and Song dynasties and flourished in the Ming and Qing dynasties, with many changes in color, material and pattern as historical trends developed, but the structure of the “horse-faced” skirt has always existed. It was not until the 1920s and 1930s that the horse-face skirt disappeared completely from the historical stage.

However, according to the horse face skirt and Dior skirt details comparison, the shape of the production can be seen in the structure version similar.

How to protect traditional culture?

Visually, the two dresses do have a lot of similarities, but “plagiarism” is difficult to define. It is not uncommon in the footwear industry to see similarities and plagiarism, but it is worth thinking about how to protect the rights.

Since the horse-face skirt is not patented for graphics and is not a mainstream cultural feature today, it is difficult to establish “plagiarism” without applying for intellectual property protection in China.

So, for the protection of more traditional Chinese design elements, should we be more vigilant to register and patent our own national intellectual property rights, and no longer just morally condemn the act of plagiarism, but use legal weapons to protect our national culture.

Now, Chinese netizens urgently need Dior to admit to borrowing inspiration from Chinese clothing and mark the words “from the Chinese horse face dress”. In this case, Dior has not replied for the time being. In fact, if Dior generously admits that the idea comes from Chinese elements, it is a plus for the brand and a good proof of the integration of Chinese culture into fashion culture.

Gucci was also accused of copying African American designer Dapper Dan, after which Gucci’s creative director Alessandro Michele responded that he “loves black culture and wants to pay tribute to his artistic predecessors”, and the two sides eventually reconciled and announced their cooperation.

Therefore, Dior should learn from this practice, respect Chinese culture, respect Hanfu design, give the netizens a reasonable explanation, and also let fashion design has more freedom to create space.

To learn more about what’s new in fashion, please contact us

In China, GMA is a company that specializes in digital marketing. Because we understand how to effectively market your Brand in China based on the market and Chinese consumers, we have created numerous successful programs. Our staff understands the latest technological advances and market trends, allowing us to provide you with a comprehensive service, from business consulting to marketing operations.