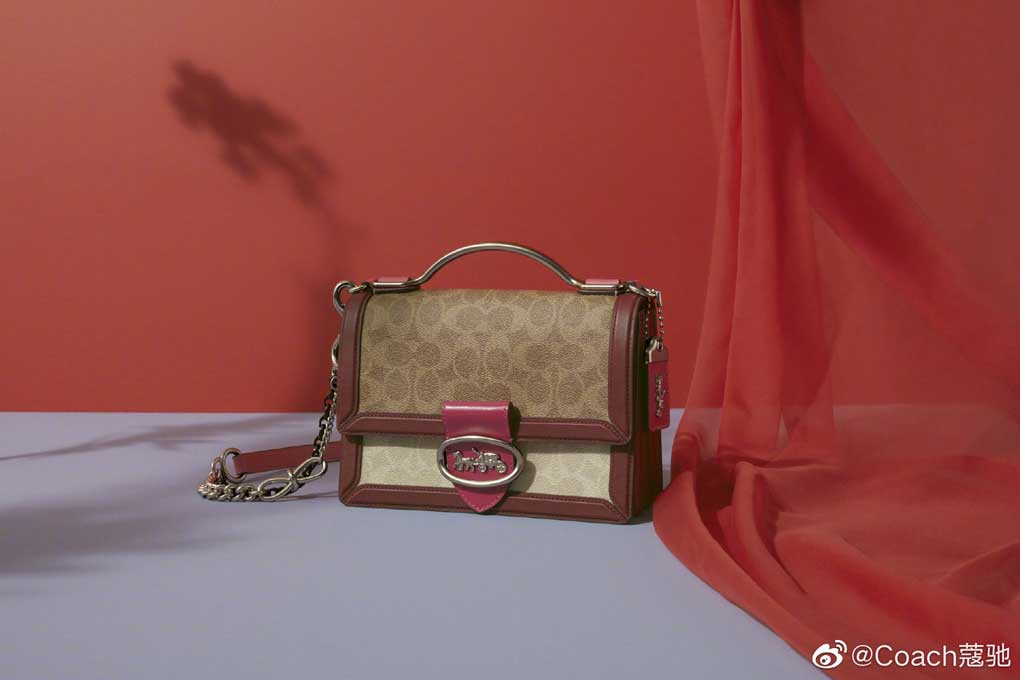 Coach is a handbag and accessories luxury brand founded in 1941. The brand has a rich and authentic American heritage. Recently, this high-end brand based in New York has incorporated new footwear and ready-to-wear collections.

Thanks to a well-planned & localized marketing strategy, Coach has become one of the most successful high-end brands in China.

As opposed to America, the fashion brand is rapidly growing in China. Over the last years, brand sales in America have fallen. In 2013, the incomes fell 12 percent from the year before due to strong market competitors such as Michael Kors, Tory Burch, and Kate Spade

As of 2020, Coach had more than 300 stores in China. Coach is regarded as a rather affordable luxury brand, that specializes in targeting the middle class in North American and European markets.

The price of Coach products in China is less attractive, indeed the price difference in Coach’s items between China and items sold abroad may amount up to more than 40%, as a result, Chinese consumers are more likely to purchase Coach items outside of China. In China, Coach has rebuilt its brand image by moving from a youthful branding strategy to a new image based on the “modern mom” category.

The brand Coach is without a doubt a very popular brand in China, part of it is because of their excellent marketing strategies, but the main reason is the affordable luxury items that the brand provides. Unique digital experiences are key when it comes to winning over Chinese shoppers and Coach has perfectly understood that proof is with their innovative campaigns.

Earlier this year the brand hosted a Livestream event featuring more than 400 drones on the Bund (Shanghai). Affordable luxury brands are getting more and more popular, especially among younger consumers who are trying to assert their personality by going after less-known luxury brands such as Louis Vuitton, Cartier, Gucci, Hermès, and so on. However because of the global pandemic, just like many other luxury brands Coach has also observed a drastic slowdown in its sales.

What is Coach’s secret to success in China? :

Coach is aware that Chinese consumers are very different from Western consumers and therefore it is necessary to adapt the marketing strategy to the targeted market and consumers. The brand’s goal is to position itself as a modern fashion brand with an aesthetic that is clearly younger compared to other countries.

Coach’s strategy in China is to adapt its branding messages specifically for the Chinese market and focus its efforts on e-commerce and social media marketing strategies. Coach was recognized as the fourth most digitally efficient brand in China. In November 2012, the luxury brand launched its e-commerce site and WeChat account, one of the most popular Chinese social networks.

So far, the secret of Coach resides in completely understanding Chinese consumers’ needs and concerns. With the creation of “10 reasons” to use Coach’s e-commerce site, the American brand has demonstrated its awareness regarding worries among Chinese online shoppers such as cash-on-delivery payment, guaranteed authenticity, and easy refunds.

Coach’s strength also resides in the fact that they know precisely how to target and create interest, as suggested by the campaign illustrated below. Indeed in order to attract Chinese consumers, the brand came up with a specific campaign for the Chinese New Year, which was of course advertised on all major Chinese social media platforms.

One of Coach’s most attractive qualities is its collaboration with a wide variety of brands. These collaborations result in very diverse campaigns for the consumers to choose from, which can be beneficial to any shopper looking for something new and exciting. Those collaborations are highly appreciated in China. They often leverage nostalgia, desire for unique design, the urgency of limited edition, and so on.

We invite you to read more about co-branding here

Coach is an innovative Brand, Innovation works amazingly in China

Coach is one of the most innovative brands on WeChat. The luxury brand offers free phone wallpaper designs and weekly giveaways in its “Try Your Luck” section via WeChat. The brand has launched numerous campaigns on WeChat such as the campaign called “What’s In Your Coach Bag?” where followers had to share pictures of the content of their purses.

Or a campaign on Weibo and WeChat where the members had to type “Modern New Yorker” (摩登纽约客) on Coach’s WeChat account in order to receive nine puzzle pieces of a picture of brand ambassador Leehom Wang. Then the participants were able to upload to Weibo the puzzle with the purpose to have the chance to win a Coach poster autographed by the superstar. The brand has around 4 million (as of 2021 April) followers on Weibo which means a strong engagement between Coach and Chinese consumers.

The success of Coach in China resides in its knowledge of Chinese consumers’ needs and concerns and about the power of Chinese social media platforms. Keeping this in mind, Coach has developed efficient digital marketing strategies by increasing its presence on social networks and developing its e-commerce site.

Partnering with national and international celebrities :

Luxury brands have been upgrading their strategies to integrate and remain attractive in the Chinese market and to do so they have been endorsing partnerships with Chinese celebrities. In Chinese consumers’ minds, they interpret it as a signal that these foreign brands value and respect Chinese consumers. Coach in China has applied similar techniques to develop and maintain a stable consumer-brand relationship as well.

Although Coach is regarded as an affordable luxury brand that targets the middle class in North American and European markets, the price of Coach in China is less attractive. Indeed it is said that the price difference of Coach’s products between China and abroad stores may amount to up to more than 40%, which results in pushing Chinese consumers to purchase Coach abroad.

Coach is one of the pioneers of digitalization in China. Back in 2011, Coach and Alibaba started their first cooperation by launching an online flagship store on Tmall. However, this cooperation only lasted two months, no official reason was given but it is believed that Coach was upset with Taobao’s failure to remove counterfeit goods from the site.

China is a country with an advanced digital e-commerce industry. As a matter of fact, in 2018, around 42% of international e-commerce happened in China. More and more luxury brands are launching their own e-commerce platform in order to boost their sales in China. Coach is one of the pioneering brands in terms of digitalization in the Chinese market. In late 2011, it was announced that Coach and Alibaba launched their first partnership, they did so by setting up an online flagship store on Tmall. However, this partnership only lasted two months, no official reason was given but is believed that Coach was not satisfied with Taobao’s failure to remove counterfeit goods from the site.

Coach is also on Baidu. When looking for “coach” on the Chinese search engine, the first result to show is its nicely designed “brand zone” (a Baidu paid advertising tool). With “Brand Zone” a brand can highlight the features/products of its choice. Brand zones are visual, catchy, and occupy a lot of space on a Baidu research page.

Search engine optimization (SEO) is a must-have for any business in China (Coach understood this). The majority of the research done by locals takes place through Baidu searches, so it makes sense that your website is optimized to rank high on their first page results if you want to have success with Chinese consumers.
Baidu’s SEO scheme is similar to Google and Yahoo: they use keywords as well as backlinks within content pages and sites that are indexed. It’s also important not just what site ranks number one but rather how many times per month those keyword phrases show up – since this determines ranking proportions. Optimizing your webpage can help boost rankings while keeping key search words closeby; adding more meta descriptions

The American brand has a very active presence on Chinese social media platforms. Its social media strategy is focused on a youthful image and the brand transmits this concept through regular marketing campaigns on Weibo and WeChat. For Mother’s Day, the brand launched a campaign on Weibo called “Hot Moms”. To participate, followers had to upload pictures of mothers with their babies with the hashtag #COACH尋找辣媽# and the tag @coach attached, with the aim to win a Coach bag.

Coach’s success is also partly due to their efficient use of official accounts on social media which allows them to increase their visibility on a larger scale. Coach has used various promotion methods to meet different market demands, including official accounts on different social network platforms, search engines, newsletters, etc… For instance, Coach’s WeChat account provides customer services, extensive introductions of products and campaigns, and access to the WeChat store. Loyal customers can also manage their membership cards and unlock personal exclusive offers in the VIP center.

Xiaohongshu is a social e-commerce platform where brands have the possibility to interact with their customers. Specifically, on Xiaohongshu, Coach can publish product info, communicate with their customers, and organize themed discussions. Through interacting with KOLs and loyal customers, Coach can simultaneously advertise its products and their value to followers. Xiaohongshu, as a platform with young active users and fashion lovers, is an excellent platform to reach target customers and attract potential customers.

Douyin commonly known as TikTok in the west is a very popular app in China. Brands have the possibility to advertise their items through KOLs collabs, very much like Xiaohogshu, TikTok is particularly useful to interact with users and to keep them updated on the brand, news, releases, upcoming collabs, sales, and more.

On Weibo, brands have the possibility to interact with their followers, Coach’s official Weibo account has a very consequent following, which makes it an important platform to advertise their luxury items to a large group of people. The extensive exposition can play a positive role in increasing the brand’s reputation and attracting more customers. Moreover, Weibo is a platform to interact with endorsed celebrities and their fans. As the fan economy has become a phenomenon in China, a close collaboration with celebrities will help Coach increase sales.

In 2019, Coach released t-shirts that showed a list of cities followed by their respective countries. However, Hong Kong and Taiwan were listed as their own sovereign nations, instead of as parts of China. This sparked Chinese people’s boycotts, subsequently, Coach’s newly named brand ambassador, Chinese supermodel Liu Wen announced that she would terminate cooperation with Coach. Although Coach in China apologized on Weibo and removed the offending T-shirt from all its retail channels around the world, the faux pas still harmed the brand image.

Want to sell your luxury brand in China?

Contact-us we have solutions for you: