How to Avoid Brands’ Boycott in China？ 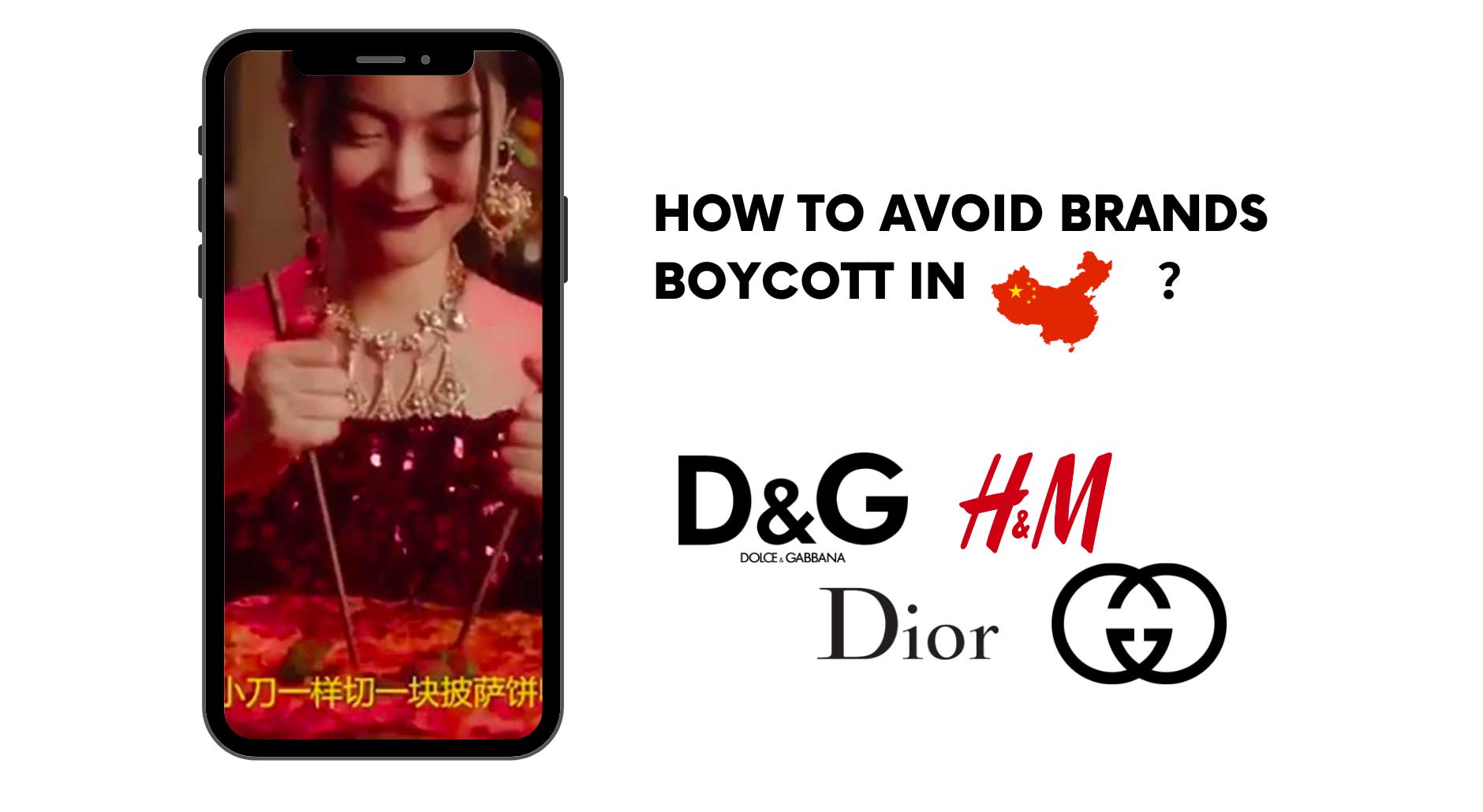 In 2021, Chinese Foreign Ministry spokeswoman Hua Chunying said at a press conference in Beijing on Thursday that “The Chinese people do not allow foreigners to one eating Chinese food while smashing Chinese bowls.” (“中国老百姓不允许外国人一边吃着中国的饭，一边砸着中国的碗。”)

In fact, as of now, China has boycotted 78 foreign companies, a six-fold increase in the number. This is also a warning to countless foreign brands; how can they be safe in the Chinese market?

All these tips are explained in the middle of the article. If you want to have some examples of fashion brands that were boycotted recently first, here are some examples of what happened in China in the recent years.

Chinese Market, which brands are being boycotted?

In the eyes of Western luxury brands, the Chinese market is becoming increasingly important in the luxury industry, already accounting for 21% of the global market in 2021, up from 11% in 2019, and this share is expected to reach 25%-27% by 2025.

The Chinese market is experiencing the strongest growth, yet Western brands are facing increasing pressure to operate in China. This is because many companies are being boycotted by China for cultural appropriation, racial discrimination, human rights, and other issues, and these failures have had serious consequences. For example:

On July 16, 2022, Dior’s mid-length skirt was suspected to be a copy of the traditional Chinese dress “Ma Mian Skirt”(马面裙), which was questioned by netizens and then also made its way to Weibo. Then, on August 2 of the same year, “Dior’s bird and flower” appeared on Weibo. The new Dior jacket, pants, knitwear, dresses, bags, shoes, and boots were all featured on Dior’s official website. Some netizens claimed that the pattern was suspected to be copied from “Flower and Bird” created by Lu Ji in the Ming Dynasty.

On July 23, Chinese and international students in Paris wore horse-face dresses and held signs in front of Dior’s flagship store to protest Dior’s “cultural appropriation” and to popularize science to the onlookers, and on July 24, more than 20 Hanfu enthusiasts from the Hanfu Society of Northern California wore Hanfu to protest in front of Dior’s store. Subsequently, Dior’s official websites in several countries and regions found that the dresses in question had been removed from the online store.

Up to now, Dior has not made a public response to the incident. This incident, to a large extent, has made Dior party completely lose credibility in China.

On November 21, 2018, Italian luxury brand D&G held its brand show in Shanghai, but it was revealed that its designer posted allegedly insulting remarks about China on social media sites, sparking controversy. The incident started when DG released several ads on social media, which combined traditional Chinese culture with classic Italian cuisine, with the title “Chopsticks for dinner”. The models are shown using chopsticks to eat pizza, but the chopsticks are referred to as “small stick-shaped utensils” in the ads. At the same time, the “Chinese pronunciation” of the narrator, the arrogant tone of voice, and the strange posture of the model using chopsticks were questioned as discriminating against traditional Chinese culture.

The brand was then boycotted in a big way – on November 21, 2018, several celebrities voiced their boycott and Chinese models went on strike at the DG show; the official announcement was made that the Shanghai fashion show was canceled; several stores on Taobao and other e-commerce platforms that buy the D&G brand on behalf of overseas customers said that they would not accept orders for the time being. Tmall, Jingdong, Netease Kaola, Xiaohongshu, and Idle Fish and other e-commerce platforms have taken down D&G-related goods.

How about preventing a boycott?

The Chinese market is free and welcomes western brands to join. However, in many cases, because Western brands do not understand Chinese culture, politics, history, and other reasons, the brands do not have a good understanding of the psychology of Chinese people. Therefore, we suggest some applicable rules for brands to survive.

China is far more liberal than you might think. There is a lot of coverage of China in the mainstream media of the Western world, and some people use it to create hype. No country is perfect, but inaccurate statements do lower China’s perception score with Western brands. For example, the previous outbreak of the “Xinjiang cotton incident”, some people will distort China’s policy on Xinjiang, resulting in these foreign brands dare not use the behaviour of Xinjiang cotton, in fact, is a disguised discrimination against Xinjiang products. Foreign brands must be equal to any part of China’s products, not on any pretext to discriminate and exclude products from a certain region. The vision should also become more international, such as taking advantage of China’s market to maintain the normal order of international trade.

2. Rebranding the origin of the brand in China

Brand origin is used by luxury groups to create messages about quality, tradition, and craftsmanship. In this form, an effective strategy, many Chinese consumers are attracted by the lure of owning a traditional French or Italian high-end brand.

A “Made in Germany” BMW must be worth more than a “Made in China” car, because German manufacturing represents high quality and performance. When countless brands are experiencing boycotts, or are preventing boycotts, they should pay attention to the fact that the origin of the brand symbolizes the actual quality culture of the brand, which is the basis for effectively avoiding misunderstandings in the Chinese market and is also the key to market reliance on the brand.

Chinese elements are not only the 12 zodiac signs, red, Chinese knots, and dragons. No one likes their watches and luxury bags to have chicken heads, dog heads, etc., so it is advisable to redesign them when using these elements so that the beautiful and cute designs are more acceptable to Chinese consumers.

In China, establishing a good network reputation is the most important, because it is the fastest circulation, once it happens, if not cleaned up in time will leave a bad impression on netizens, bringing huge losses to the enterprise. In the era of “everyone is self-media”, information dissemination channels have become diversified from one. Brands need to take responsibility to explain in social media in a time when a crisis comes, and to express a responsible attitude when mistakes are made, eliminate the public’s negative and hostile emotions, reduce attention, and rebuild trust and reputation. China is receptive to brands that actively admit their mistakes but is tough on brands that don’t change their ways.

Do you want to market your brand in China?

GMA is a full-service agency located in Shanghai, China. We are working on the marketing, e-reputation, e-commerce, and distribution of international brands to enable them to perform in China. If you want to have some consulting about your brand, we can organize a meeting.