Top 10 Retailers for Fashion and Luxury Brands in China 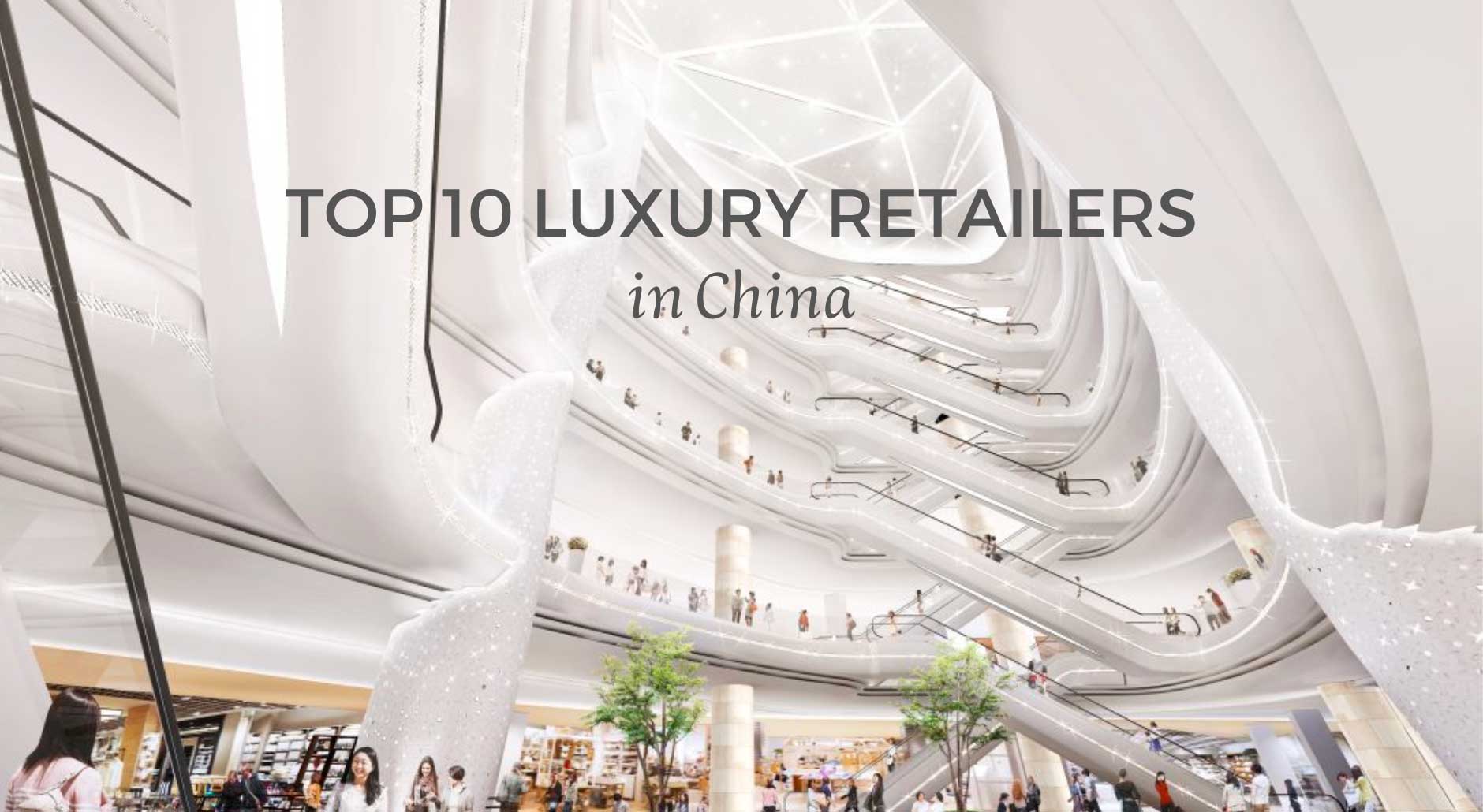 In China, luxury online sales accounted for 34 billion USD in 2021. This is more than the total luxury revenue generated in Japan in 2021. When you think about the large share of online sales, you may also be curious about offline sales. Especially in the luxury and fashion world, where offline still plays a huge part. With the recovery from Covid, the demand for offline retail is increasing at a faster speed.

According to the report by the China Chamber of Commerce in August 2022, the increased speed of online retailers has dropped from 30.1% in 2020 to 19.3% in 2021. On the other hand, offline retail has shown a restorative growth of 12.7%. We can foresee that in 2022, offline retail is still growing in China and playing an important part.

We have received the latest data about the Top 10 retailers for luxury brands. To help you figure out which retailer you can cooperate with in China, here we will introduce you the best ranking according to this year revenue and activation.

If you want to directly reach out to one of them, you can directly contact us.

SKP Beijing is currently the number 1 shopping mall in China. Founded in 2007, SKP Beijing is transmitting the value of fashion, seeking the best in life, and sharing with honesty. Their vision is that Chinese citizens deserve their own fashion icon.

SKP Beijing has obtained 23.9 billion CNY in revenue in 2021, with a 35% growth compared to their revenue in 2020. The growth in offline retail shows a greater ratio in big shopping malls such as SKP Beijing, under the positive impact of policy and customer motivation, we can expect their performance to keep growing in the 2020s.

In the meantime, SKP explored other Tier cities with its second shopping mall in Xi’an, another big city in the northern part of China. Opened in 2018, Xi’an SKP has reached an annual sales revenue of 8 billion CNY in 2021. The year-of-year growth is even higher than Beijing SKP at 37.93%, taking the 18th place among Chinese shopping malls.

Deji Plaza is a shopping plaza located in Nanjing, one of the most historical cities in China. As the capital city of 6 dynasties in Chinese history, Nanjing is still blooming as a first-tier city in China. Deji Plaza is made up of 2 phases, phase 1 was finished in 2006, which is the launch year of this huge shopping mall. With the launch of the Deji Plaza phase 2 in 2012, it started growing at a rapid speed. Over 95% of first-tier luxury brands have entered Deji Plaza, skyrocketing their offline sales among one of the best Chinese shopping malls.

From the data, Deji Plaza shares a very close revenue with China World Mall in 2021 at 20 billion CNY. But as a blooming player, it is growing faster than China World Mall with a 30% growth rate. We can expect Deji Plaza to take second place among Chinese offline retailers in a very short time even just in 2022.

Shanghai International Finance Center, in short, Shanghai IFC is currently the biggest business center in Shanghai. There are 3 buildings in the Shanghai IFC, including a high-end office, hotel, and shopping mall. The shopping mall of Shanghai IFC (IFC Mall) has 110,000 m2 of the total business area and is a combined facility of shopping, entertainment, food, leisure, and art.

Since its launch in 2010, Shanghai IFC Mall is attracting hundreds of top brands from all over the world. In 2021, the IFC Mall reached around 18.5 billion CNY in sales revenue and is the 4th biggest shopping mall in China. Boosted by the economic power and commercial environment of Shanghai, the annual growth of IFC Mall has reached an incredible percentage: 68.18%. With the recovery of Covid regulation, the growth in 2022 might be even more enormous. We can see the IFC Mall as the biggest competitor of Deji Plaza on the rank of Chinese shopping malls. If they can keep this rapid development in the next few years, the first place is not hard to reach.

Located in the city center, the Shanghai Hang Lung Plaza is one of the biggest shopping malls in Shanghai. Since 2001, the 288-meter tower has been one of the busiest commercial centers. The whole building has 66 floors, it is also called Plaza 66 because 66 is a lucky number in China. Hang Lung Plaza is widely known as the place for luxury, with hundreds of luxury brands presented including Chanel, Celine, and Burberry.

In 2021, the Wuhan Mall reached annual revenue of 15 billion CNY, ranked sixth in China. With the growth of Wuhan’s local economy, Wuhan Mall is also growing fast. Their annual growth in 2021 has reached 50%, more than most other shopping malls. When the competition in Shanghai and Beijing is already fierce, Wuhan can be an alternative market for newcomers. Brands can benefit from a much lower cost of rent and labor as well as the fast development of Wuhan, including the presence of important luxury shoppers.

The Mixc is a shopping mall located in Shenzhen, one of the first developed cities in China. Although it is not as advanced as Shanghai or Beijing, the local GDP is still ranked third, leading the other first-tier cities. The Mixc has opened in 2004 as a facility combining different functions including retail, food, entertainment, office, hotel, etc.

Shenzhen The Mixc has nearly 13 billion in sales revenue in 2021. After 18 years of development in Shenzhen, The Mixc is still growing at a speed of 30% in 2021. This growing pace is not too massive compared to the other shopping malls in Shanghai or Wuhan, but still enough to keep it in the Top 10 offline retailers in the 2020s. Shenzhen is included in the 4 Top cities of China Beijing, Shanghai, and Guangzhou. If you want to make sure your boutique is open in the biggest cities in China, Shenzhen is also the one you cannot ignore.

The Shopping Mall is divided into 4 buildings targeting different customer groups. Building A is mainly for women’s goods, Building B is for comprehensive products, Building C is a living hall and Building D is for luxury and fashion products. The clear division of the whole shopping mall makes it easier for customers to choose the place to go, and also made it clear for brands to locate themselves in the Hangzhou Tower.

TaiKoo Hui was awarded as one of the Chinese five-star shopping centers in 2019. Located in the city center of Guangzhou, one of the 4 biggest cities in China, TaiKoo Hui made 10 billion CNY in revenue in 2021. There are more than 180 brands joined TaiKoo Hui, and more than 70 of them are the first boutique in Guangzhou. These brands all believe that TaiKoo Hui is the best choice for them to make the first step in this city.

The growth of TaiKoo Hui in revenue is not as high as other Top 10 shopping malls but the potential is way higher than any European mall. With a 25% growth in 2021, its potential remains high for any luxury or fashion brands searching for a retail space. Today, it is still the biggest shopping mall in Guangzhou, brands can still launch their boutique in TaiKoo Hui as a smart choice.

Chengdu IFS, as known as Chengdu International Finance Square, is the biggest shopping mall in Chengdu. Located in the Sichuan province, Chengdu is the home city of pandas. The designer of Chengdu IFS smartly used this element in the Shopping mall and made it a must-be place of interest in Chengdu.

Chengdu is one of the first-tier cities in China, but it’s still hard to be compared with Shanghai. Limited by the growth of the local economy, the growth of Chengdu IFS was 20.48% in 2021. It is still currently the biggest shopping mall in Chengdu and can be a good choice for brands. Based on our strategic recommendations, we recommend to focus on this top 10 if you want to maximize your offline exposure and sales among luxury shoppers.

With more than 10 years of experience in China, GMA can provide you with 360° support for your brand in China. If you want to develop your brand in China and get access to these luxury and premium retailers, you can contact us. We will provide a free consultation to select together the best shopping malls and find out the best retailer that fits you.