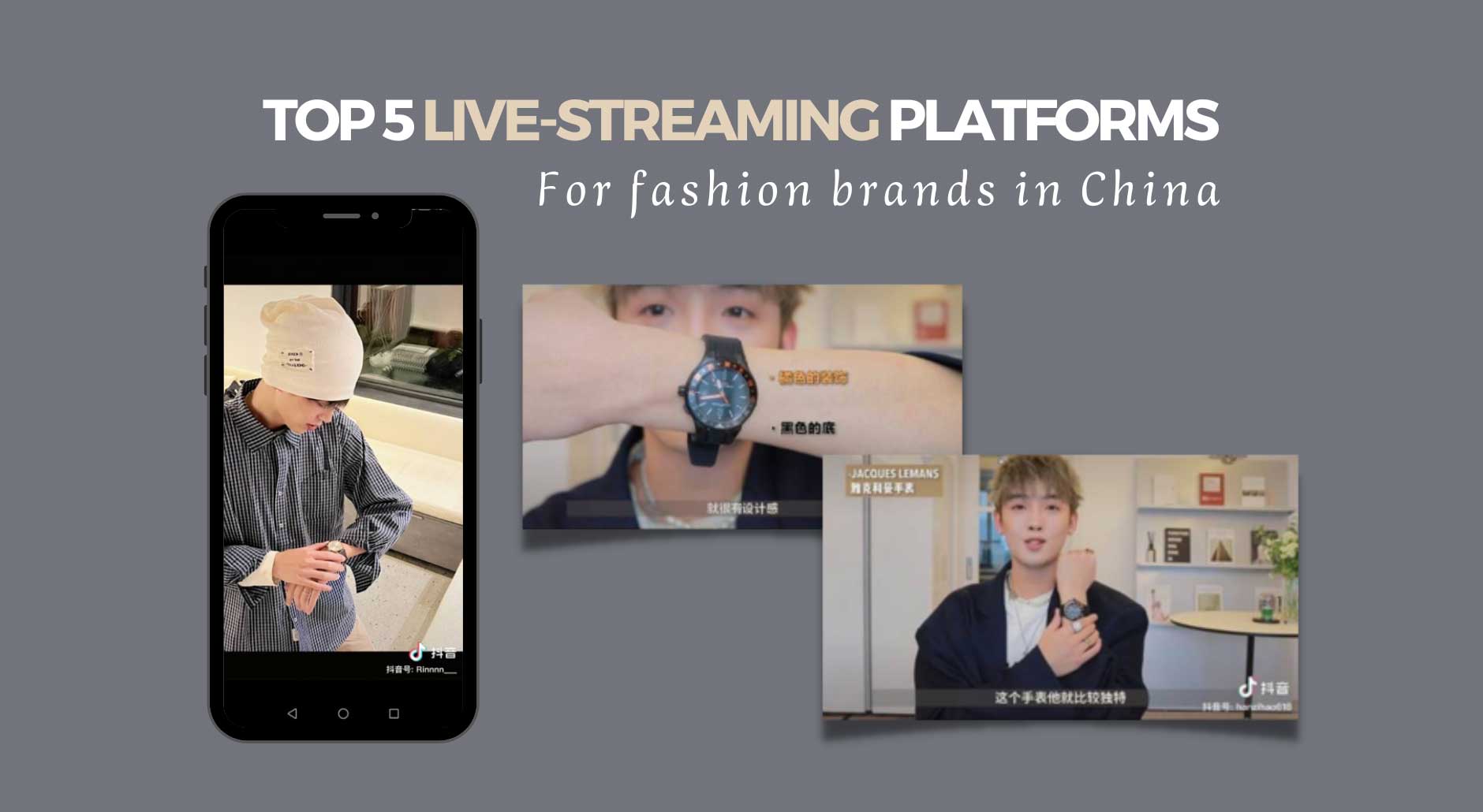 The development of the Internet has given birth to many new professions, and the Chinese live-streaming industry has also been developing rapidly. Especially in the West, we always hear of fairy tails about successful live streaming that enabled fashion brands to be out of stock in mainland China in less than a couple of minutes. What are the live-streaming apps for fashion brands? How to select the right ones and implement the most result-driven strategy?

As of June 2021, the scale of China’s webcasting users reached 638 million with a YoY growth of +47.2% compared with the same period in 2020. The current Chinese live-streaming app users pool is accounting for 63.1% of the overall Chinese netizens. With the rapid development of internet technology, the webcasting ecological chain is attracting attention, the scale of webcasting users continues to rise, and the live broadcasting industry has a huge market development space.

In 2022, the number of live-streaming users should reach about 660 million people.

The Opening of the Live Broadcasting Era in China

Looking back, live broadcast in 2005 was mainly presented to everyone in the form of video chat rooms, and the first year of China’s network live broadcast officially arrived in 2016. At that time, the live broadcast was dominated by live e-commerce platforms, such as Jumei Youpin, Mushroom Street, and Taobao Live.

In 2020, the live-streaming system has matured and live broadcast has entered the house of all people. Chinese netizens watch, interact, purchase, and entertain themselves with live-streaming at home or on public transport.

The Evolution of Live-Streaming for Fashion in China in 2022

The major change came from the birth and decline of live-streaming superstars such as Viya and Austin Li who were respectively ranked TOP1 and TOP2 key opinion leaders (KOL) in China. Viya who had 80 million followers on Weibo was fined by the Chinese government for tax evasion while Austin Li was spotted in 618 for promoting an ice cream that looked like a tank during the Tiananmen Square Protests anniversary.

The King and Queen of live-streaming for fashion brands lost their crown. The market is evolving at a fast pace and small or medium influencers are thriving on new platforms. If you want to be broadcasted live on Chinese platforms, these are the best platforms to work on.

What are the 5 Major Live Broadcast Platforms in China?

DouYin (抖音 in Chinese) is a short-form video-sharing platform that aims to help the public to express themselves and record a good life. The app was officially launched in September 2016 and is open to people of all ages. Users can choose songs and shoot short music videos to form their own works through this software, which will update users’ favorite videos according to their preferences.

On July 24, 2021, DouYin opened a “luxury + live broadcast” feature for luxury and fashion brands. The luxury brand Coach used this feature to launch COACH X BAPE 2.0 co-branded limited edition. They achieved 21 million GMV and more than 450 million omnichannel exposure by the live broadcast. This activity has a strong resonance and brings strong support for luxury goods to better open the road of live e-commerce.

In 2021, Kuaishou’s live-streaming business annual revenue reached 31 billion RMB. In the past years, Kuaishou launched “live with the post”, and ecological exploration of industrialization live-streaming. The human resources anchor Liu Chao used Kuaishou to help 4,000 to 5,000 migrant workers find work. From living with goods to living with a post, from consumer services to match employment, Kuaishou has improved social value. Louis Vuitton noticed the importance of this platform and launched a live-streamed menswear show that reached 49 million viewers on Kuaishou.

3. Taobao with its Taobao Live Feature

Taobao 淘寶 is the number 1 e-commerce platform in China. Specializing in C2C, Taobao is also the search engine for Tmall stores and Tmall Global stores, mainly used by luxury and fashion brands.

In February 2019, Alibaba made the live broadcast module in the Taobao app independent, forming an independent app called Taobao Live. According to information from Alibaba’s fiscal year 2021 Q3 earnings report, Taobao Live brought in more than 400 billion RMB in GMV for the 12 months that ended December 31, 2020.

The average daily active users of Taobao Live increased significantly in 2020, up 100% year-on-year. In particular, the user increase was most significant during the 330 Live Extravaganza, Tmall 618, Tmall Double 11, and other major promotion stages. The choice of anchors, not only stars and the president, shopping guides, and others closer to the brand, more specialized role to become the anchor.

In 2008, YY Voice was launched as an instant communication tool for World of Warcraft players, and in 2011, YY Live was launched with the concept of art anchors and listeners, and since then YY Live has maintained its position as a pan-entertainment live streaming platform, with products, content, and business layout around it. In terms of innovation, YY Live is the inventor of “live reward” today.

Since its creation, Huya has been focusing on the mining of head anchors in the game category, signing up several popular anchors at a heavy cost. In addition to the big anchors, Huya also actively cooperates with celebrities, inviting Chen He, Tang Yan, and other stars to participate in the platform’s live broadcast.

In 2020, the luxury brand Louis Vuitton entered Little Red Book for a test although the effect is difficult. But there was a breakthrough that became the first major international brand to try it, becoming a guide and spearhead for the entire luxury industry to act in the Chinese market.

Want to Live-Stream with Goods in China? Contact us

Indeed, there are many opportunities to develop your business in China. Thanks to the digitalization of society and new marketing tools. However, in China, you really need to gain market share faster than others, because the pace of business is very fast, and the environment is constantly evolving.

In China, GMA is a business that specializes in digital marketing. Because we understand how to efficiently market your company in China in accordance with the market and Chinese consumers, we have created numerous successful projects. Our staff is located in our HQ in Shanghai and is knowledgeable about the most recent technological advancements and market trends, enabling us to offer you a comprehensive range of services, from business advice to marketing operations.