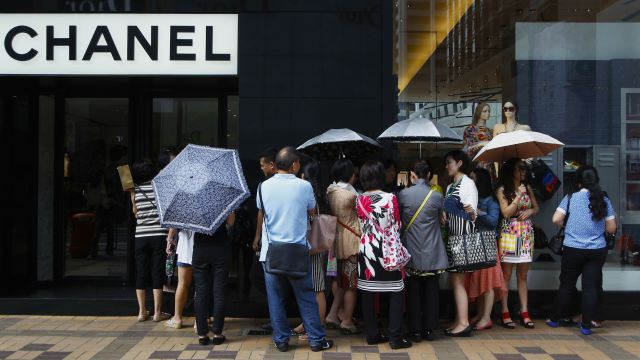 After a week of demonstration of the young Hong Kong society, and fight with the police use tear gas, batons and pepper gas against demonstrators, travel agents said the number of Chinese visiting Hong Kong was down nearly 30%. 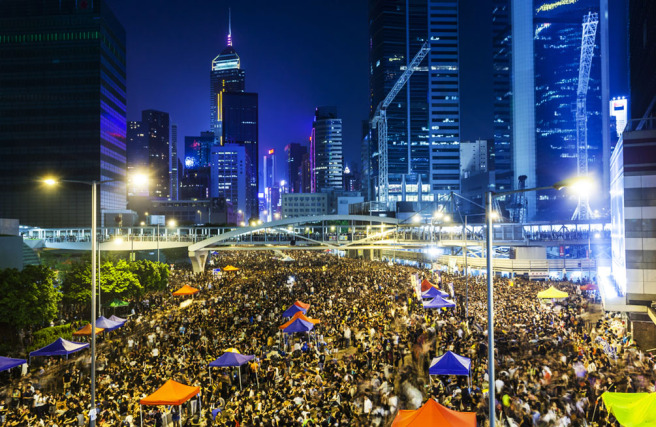 Although there has been no serious violence this week, analysts said retail sales in the city have taken a major hit.

Represents Hong Kong for about $ 9.7 billion in sales of global luxury, or 4 percent of the world total, according to estimation.

The Golden Week is important for luxury retailers

“As Golden Week could be responsible for half of the total of the month, and anecdotes of the market suggests that store sales decreased by approximately 70 percent, businesses affected may have lost HK $ 2.2 billion (285 $ million), “said Raymond Yeung, a senior economist at ANZ Bank in Hong Kong.

Estimates of this kind have weighed on stocks of luxury goods makers such as Prada, Hong Kong-listed shares fell to their lowest in more than two years Friday.

One piece of good news for retailers comes from other cities popular among Chinese visitors, such as Singapore, Tokyo and Sydney, where anecdotal evidence suggests tourists from China were spending hard.

The glitzy Marina Bay Sands Singapore a saleswoman at Burberry shopping center said that the majority of customers this week was mainland China – often called locally PRC, the People’s Republic of China.

“We were busy serving RPC clients all morning,” said a sales assistant at Prada. “We expect to increase over the weekend and maybe Hong Kong protests continue.”

Hong Kong-listed Prada made 388 million euros ($489 million in sales from its Greater China division in the six months to the end of July, more than a fifth of its total revenues in the period. Most of its customers are Chinese tourists who come to the city as tourists.

The shares, trading after two days of holidays, later pared losses to trade down 1.5 percent, compared with a 1.1 percent fall in the benchmark Hang Seng Index.

The group also faces other problems. Its chairwoman Miuccia Prada and her husband, chief executive officer and fellow shareholder Patrizio Bertelli, are being investigated by Italian authorities over past taxes, Prada said on Monday.

It was similar to Italian fashion house Fendi history, where an assistant said “. We have seen a significant increase in Chinese buyers, about 30 percent more Golden Week is great for all retailers, not just us. ”

In Tokyo, the department store chain Isetan reported nearly three times more Chinese visitors than a year ago, helped by a change this month in the politics of self-service in Japan. “There are eight seats for the counter instead of three last year service free of duty to accommodate more customers,” said spokesman Masaki Shimizu.

“From what we heard from our stores attendants, there were still about 20 people in line, and about 80 percent were Chinese customers.”

Australia, who are currently studying relaxation of visa rules to attract wealthy Chinese, is a destination increasingly popular class of increasingly affluent visitors from China.

In Sydney, the staff of Gucci, Hermes and Miu Miu all reported a resumption of Chinese visitors this week.

“There is definitely an increase (Chinese tourists) – double the amount of people – because we are expanding, many of our customers are Chinese,” said Iris, a salesman at Burberry’s flagship store. “Golden Week is great for Burberry.”

That the pro-democracy protesters defy the leaders of the Communist Party of China in the streets of Hong Kong, spare a thought for the luxury retailer.

Already affected by persistent anti-corruption Beijing has aroused strong decline in conspicuous consumption among the rich Chinese goods makers, high-end depend increasingly on the purchaser of the continent country are now feeling the effects events in Hong Kong, where visitors from China have fallen sharply.

“I believe that most of what is sold in Hong Kong is made ​​for tourists from mainland China,” said Luca Solca, commodity analyst at global luxury Exane BNP Paribas, noting that brands such as Gucci count city ​​for a tenth of global sales.

Demonstrations in Hong Kong, the biggest challenge for leaders in Beijing since the former British colony returned to China in 1997, coinciding with the “Golden Week” holiday in China, traditionally important for luxury retailers in the region such as Christmas or New Year are in Western markets.

View Our Agency and our Services