The Metaverse in China: How Luxury Brands are Using Virtual Reality in Digital Marketing? 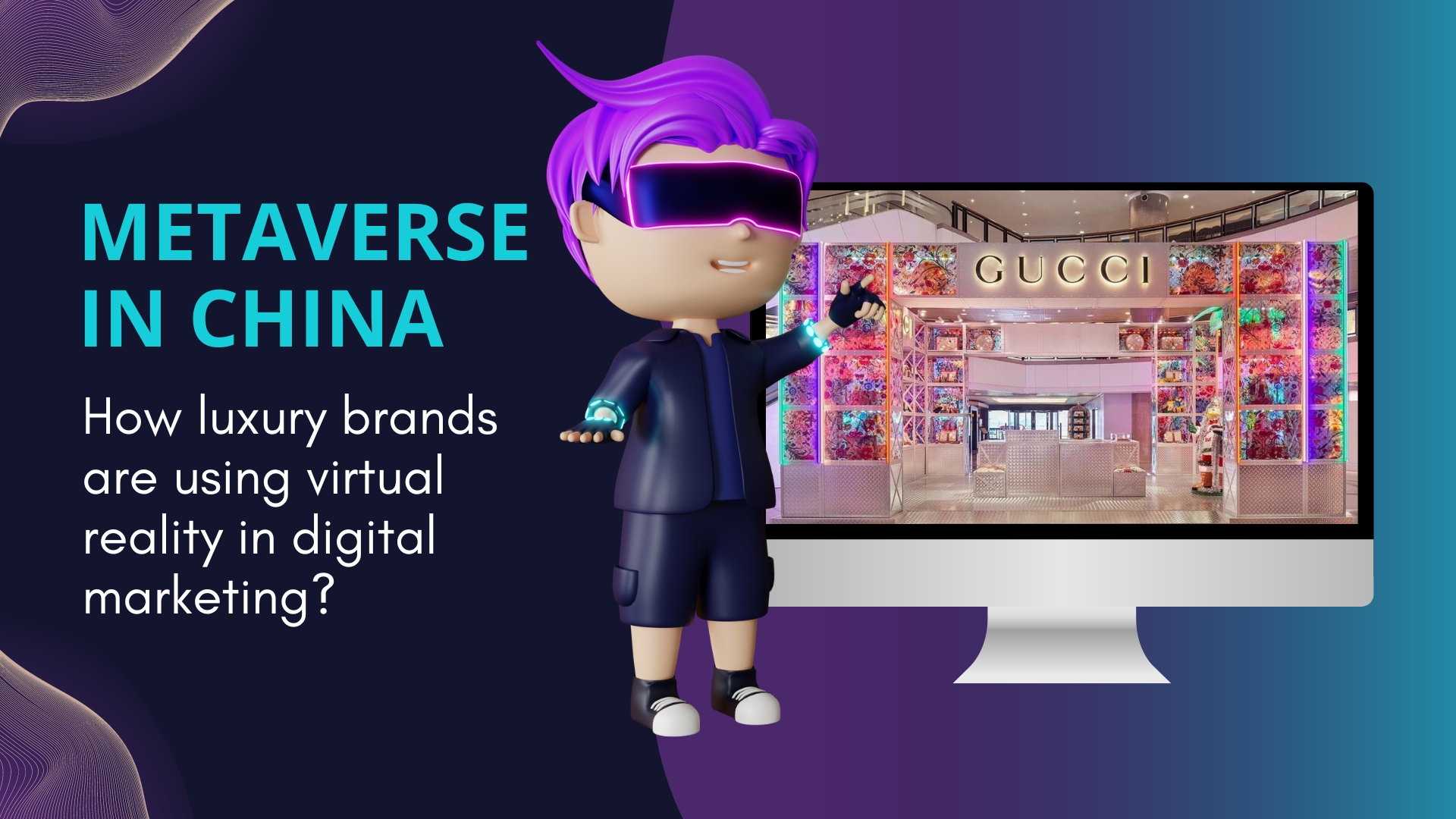 The metaverse, so-called ‘virtual worlds’ and augmented reality were definitely one of the most spoken topics in 2022. Chinese tech giants are working hard on the metaverse development, and the local governments are also betting heavily on the idea, investing in virtual reality with Chinese characteristics, hoping it will bring investments and capital to Chinese cities.

What are the virtual worlds and the metaverse?

Virtual worlds are digital spaces where people can interact and engage in various activities. There are different types of virtual worlds, such as social worlds, gaming worlds, and educational worlds.

Metaverse is a liberating experience that blurs the lines between reality and cyberspace. You can create your own avatar, meet new friends from all over the world in virtual worlds or play cutting-edge video games with high-quality graphics at competitive speeds – it’s up to you!

The introduction to metaverse in China

Although the metaverse trend evolved mostly when Mark Zuckerberg changed Facebook name to Meta, the Chinese tech world didn’t stay behind. The Chinese are taking this new branding seriously, with more than 400 companies applying for trademarks related to “Meta” or its alternatives. Other tech giants have also jumped on the bandwagon including Alibaba securing Ali Metaverse as their own name in just one day after Facebook changed theirs!

According to a survey done by Statista, more than 88% of Chinese netizens are aware of the new trend and have at least a basic understanding of virtual reality, while the remaining 12% have at least heard about the term.

China’s metaverse is succeeding especially during the COVID-19 pandemic when many people are fed up with web-based lifestyles and are looking for more realistic ways to interact with each other. According to the survey, more than 60% of Chinese internet users are willing to socialize with friends in the metaverse.

Chinese society is very technologically advanced and Chinese people are always curious and excited about new trends in the tech industry, always eager to learn more about them. On the contrary, Western society is more skeptical and needs more time to get used to new technologies. The use of virtual realities is also supported by the Chinese government, which is heavily investing in new technologies and the digital world, wanting to become the digital superpower.

How do luxury brands use the virtual world to enrich customer experiences?

Thanks to the fact that the metaverse connects the virtual world with the real one, it creates many opportunities for brands to offer their Chinese consumers an entirely new shopping experience, where they can access real events within an artificial, virtual reality.

China’s tech giants are creating metaverse apps, where people can create digital avatars of themselves, follow their virtual idols and perform all the activities that they would do in the real life.

We decided to divide campaigns into 5 different areas of the Chinese metaverse, which are; metaverse & virtual reality in general, gamification, IPs, phygital experiences, and NFTs. Let’s take a look.

The first world fashion show in the metaverse took place on 28 April 2022, as a result of the collaboration of Dior and Meta Media company from Hong Kong. Dior goes all in, presenting its autumn menswear collection in the virtual skyscraper Meta ZiWU.

The digital experience included virtual makeup try-on coupled with product specifications so that customers could make a shopping decision based on the virtual experience. The virtual space was promoted through live streaming, another big trend in today’s e-commerce. It was also promoted by brands’ south-Korean ambassador, ITZY, which is a famous k-pop girls’ band.

But when it comes to the metaverse, gamification gets to a whole other level, where brands collaborate with famous mobile games and Chinese firms focused on esports and create a new, mixed experience for customers.

Tiffany & Co., one of the world’s most famous jewelry brands in August announced a long-term partnership with Riot Games, one of the esports giants, known mostly for League of Legends, one of the most popular computer games in the world.

The gaming industry is a huge business in China and all the luxury brands are fighting for the best spot, because younger generations that love to play those games are becoming one of the biggest consumer groups in the market.

Tiffany partners with Riot Games to craft a special trophy for this year’s League of Legends World Championship Trophy, which you can see above. It’s not the first collaboration like this, as Tiffany already partnered with Riot on the redesign of the League of Legends Silver Dragon Cup. We can be sure that there will be more collaborations between the luxury and gaming industries in the future.

Another great example of a luxury giant with a popular Chinese mobile game is the collaboration of L’Oreal and Peacekeeper Elite, where the two companies created a very innovative marketing campaign, mixing online and offline experiences.

Peacekeeper Elite created a virtual hair salon within the mobile game to promote L’Oréal’s hyaluronic styling spray. In addition, one of the most popular virtual influencers, Gilly, was used as the face of the campaign, as a way of attracting 40% of the female audience of the game. The game was also promoted through videos on Bilibili, attracting millions of new consumers from younger generations.

So-called IPs are virtual character which has been substantialized into collectible figurines. They are gaining huge popularity among Chinese Internet users, as they are often linked to favorite Chinese games, tv-series, and so on. Luxury brands start to understand the trend, shortening the gap between luxury and pop culture, by collaborating with famous IPs.

Gucci is one of the leaders when it comes to the metaverse and virtual realities in China, engaging in many collaborations and initiatives aiming to attract younger consumers.

Marsper is an IP created in 2020 with the aim to promote individualism and love. Marsper engages with many artists from all over the world to explore the meaning of love and show different approaches, visible in art.

As you can see in the image above, Gucci and Marsper collaboration was introduced by three figures wearing suits from Gucci’s Aria Collection. The blend of Marsper’s cool and relaxed attitude attracts many young consumers and Gucci’s signature style is a big hit. The campaign was a success, and we can be sure that Gucci will engage more in this type of activity in the upcoming months.

Pop Mart is the leading company in China’s IP collectibles industry, featuring IPs from the most popular games, comics, and anime. Pop Mart started and grew a trend of collecting toys among Gen Z consumers, attracting young Chinese people with affordable ‘blind boxes‘ offers, containing small figurines, that are a surprise from the buyer before opening the box.

Pop Mart also engages in the metaverse in China, offering its virtual IPs, which are usually very limited, creating additional buzz among Chinese enthusiasts. Moncler, the Italian brand that has been very successful in China in recent years, understood the opportunity, by partnering with Pop Mart on the creation of MEGA COLLECTION 1000% SPACE MOLLY. The collection was limited to 2000 collectibles worldwide, which created great hype among toy collectors.

Phygital: a blend of physical and digital experiences

Phygital is a mix of two words; ‘physical’ and ‘digital’. It’s the concept of using technology and virtual realities to link the digital and physical world with the purpose of providing unique interactive experiences for customers. Companies all around the world start offering the integration of physical and digital elements in the shopping experience, to make the shopping experience more convenient and interesting.

Jimmy Choo decided to go bold, with an amazing collaboration with New York-based artist and designer Eric Haze and Japanese fashion icon Poggy, creating an innovative collection. To promote the release of new products, Jimmy Choo revamped designated boutiques and launched pop-up stores around the world, including at three luxury hotspots in China: Sino-Ocean Taikoo Li in Chengdu, SKP-S in Beijing, and THE Hall in Shanghai.

But what the collection has to do with the virtual world? Apart from pop-up stores with limited-time offers, Jimmy Choo also launched a collectible toy BE@RBRICK, which debuted as part of the capsule, rendered in an iridescent form to match Haze’s star theme. The IP could be purchased in the Hall in Shanghai for a limited time only, therefore, it sold out the same morning it launched.

The collection was promoted heavily by Chinese celebrities and top influencers. According to Jing Daily, “posts by the individual artists, along with other KOLs and fashion accounts, helped the hashtag #JIMMYCHOOxERICHAZE gain over 65 million views“.

In addition to the event, Jimmy Choo also dropped an NFT version of the sneaker, available on auction on the Binance platform. All profits will be donated to Jimmy Choos’ foundation.

In 2020, Burberry, as one of the first luxury companies engaging in virtual reality in China, introduced a new concept of luxury stores where consumers can interact with Burberry products and the brand both digitally and in physical stores.

Leveraging the power of social media interactions on WeChat, customers can unlock exclusive content and personalized experiences through the WeChat mini-programs and share them with their communities.

The new Burberry’s first luxury social retail store in Shenzhen has 10 rooms and offers a truly interactive experience. When entering a store, customers can view their first digital experience, which is a living sculpture, inspired by the mirrored runway of the Burberry Fall / Winter 2020 Memories fashion show.

Customers can also scan the QR codes of products, to see them digitally, with additional information and possible discounts. It’s one of a kind store that’s opening a new era of retail in China and worldwide.

The NFT luxury market in China

Non-fungible tokens, or NFTs, refer to a set of digital collectibles safely stored and authenticated on the blockchain. These digital assets can represent various real-world objects, like in-game products, collectibles, art, songs, videos, autographed tweets, emojis, clothes, jewelry, and more. As its name suggests, an NFT is unique and cannot be substituted or replicated, unlike fungible assets such as bitcoin.

We already mentioned some NFTs in this article, like Jimmy Choos’ sneakers, so let’s take a look at one more example;

Richard Quinn is a well-known British designer with a very distinguished bold style. In October 2022 he decided to release his first-ever NFT collection, the so-called ‘London Fashion Week in Bloom” token series in partnership with Clearpay and The British Fashion Council. The collection includes a special and of course limited edition NFT rose. This rose is a digital take on blossoms featured on the physical runway that year.

All the buyers of this NFT token were invited to attend a VIP event in London’s Covent Garden or receive a collection of accessories in the iconic Richard Quinn floral print created exclusively with Clearpay, including items such as a bucket hat, a scrunchie, and a tote bag.

We can guide you through a new era of digital marketing in China!

Although these concepts might seem weird and complicated to many Western brands, that are not used to such marketing campaigns, it’s a future of digital marketing that is worth the attention it’s currently getting in China.

Be one step ahead of your competitors, creating an impressive virtual campaign. We are a China digital agency with more than 10 years of experience in the luxury market. We helped over 600 brands.

We are excited about the new era of digital marketing in China and we are hyped about helping brands create metaverse offerings. Leave us a comment or contact us, so that we can start this immersive experience together!