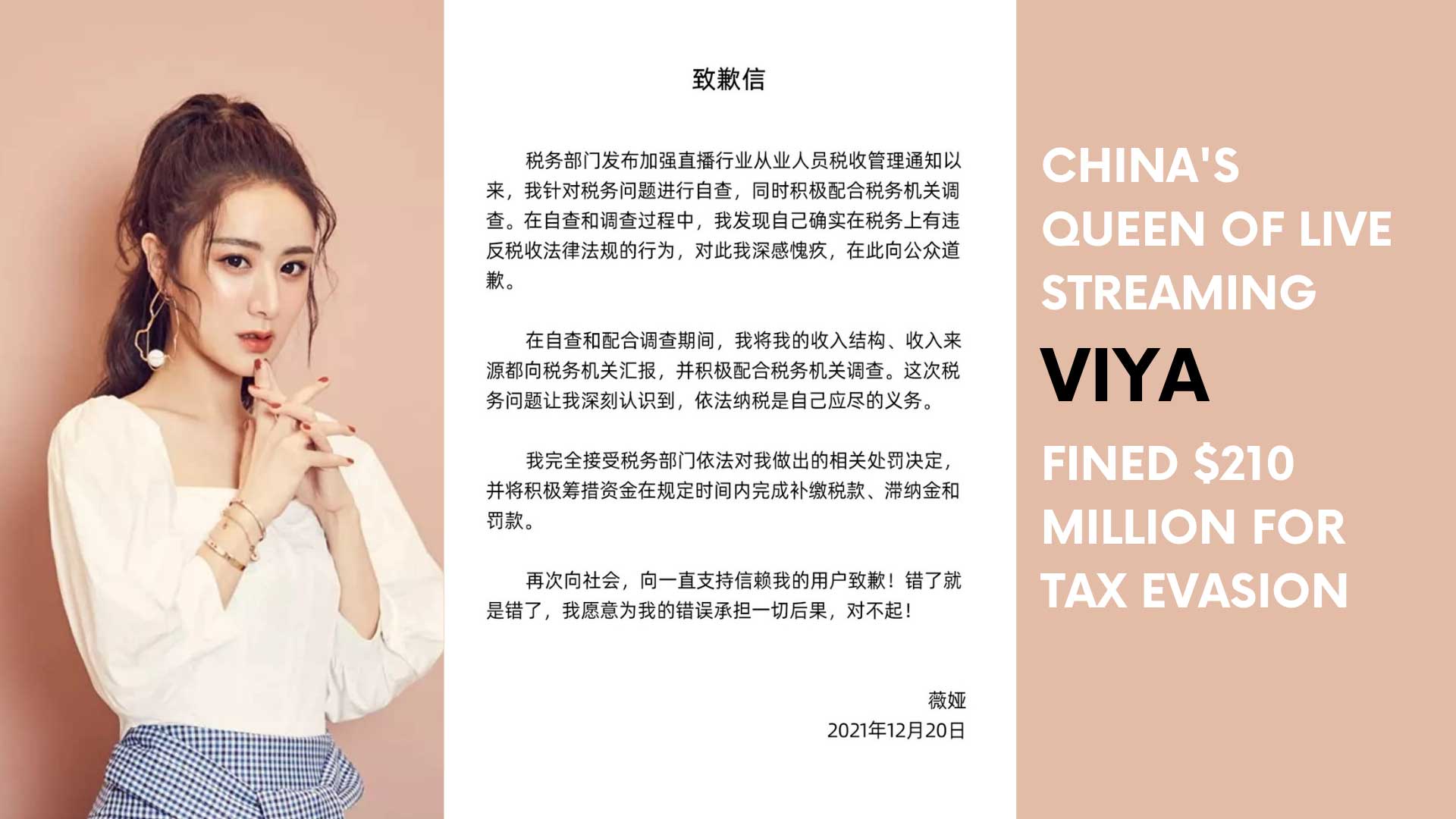 Huang Wei, renowned under the name Weiya or Viya on Chinese social media is facing a backlash. The star Chinese influencer for luxury and fashion brands is accused of hiding her personal income and other financial cases between 2019 and 2020. As Beijing stated, Viya “evaded 643 million yuan of taxes through means such as concealing personal income and false declarations of income”.

The hashtag #ViyaCompletelyBlockedOnline is in top discussions on Weibo. How will that affect the KOLs and influencers landscape in China?

Who is Viya, the Top KOL in China?

For luxury and fashion brands in China, Austin Li 李佳琦 and Viya 薇娅 are the star influencers for brand endorsement. They generate high exposure, high sales, and very often out-of-stock star products after only one live stream.

Named by TIME magazine among the 100 influential figures of 2021, the queen of live streaming is losing her crown. Viya was the reference for luxury brands due to her strong performance and high exposure. In brief, her performance is outstanding:

The unique unicorn story started a couple of years ago. After opening a small shop with her husband in Beijing, she participated in a TV reality show and singer contest named Super Idol. This television show boosted her career and her notoriety. Thanks to this wide exposure, she decided to launch a store on Taobao in 2012 and was noticed by Alibaba who decided to approach her for the launch of Taobao Livestreaming in 2016.

In a couple of years, Viya reached over 18M Weibo followers and more than 80M Taobao followers. Everything changed with the tax evasion since the star KOL is now banned from these social media and e-commerce platforms.

Always going viral for luxury brands endorsement, Viya薇娅 is now under the spotlight for fraud. Especially on major shopping festivals like Single’s Day (11.11), the queen of live streaming could generate millions of sales in only one day. And when you are under these big spotlights, it is even more complicated to hide. Authorities fined her for tax evasion with a record of 1.34 BILLION RMB, which is 210 MILLION USD.

On Weibo, the superstar posted a letter of apology immediately after the scandal outbreak. She explained: “this tax issue made me deeply aware that paying taxes in accordance with the law is my duty […] Once again, I apologize to the society and users who have always supported and trusted me”.

Beijing is launching a campaign to better control influencers and live streamers’ work. The entertainment sector is falling under the control of the “common prosperity” initiative to reduce economic inequality. In 2020, Viya sold up to 38.6 BILLION RMB worth of products. Not surprised? This sales performance accounts for 35% of Macy’s worldwide total net sales. The influencers business is huge in China, and KOLs achieve more sales than regular distributors or retailers. So, it can be a steep bill. The current fine of Viya represents 40% of the fine charged on Meituan for antitrust violation in October 2021.

Limit the “Influence” of Influencers in China through Tax Regulation

In China, new investigations for tax fraud and new regulations including AI cloud supervision systems are implemented. The live streaming industry is now shaking, and around 1,000 live streamers immediately reported their tax on December 20th after the Viya scandal outbreak. All eyes are now turning to Austin Li 李佳琦 also named Li Jiaqi or “Lipstick King”. He used to be the Top2 influencer after Viya, and was renowned for selling thousands of lipsticks in a couple of minutes… or seconds.

Will Li Jiaqi take the #1 ranking? Who will be the new star of live streaming in China? Only time will tell, but luxury and fashion brands are already looking for newcomers to prepare for their next move.

What is the Impact on Brands and Influencers?

Such a scandal is affecting business… for both brands and influencers. In China, there are more than 400 MILLION live streamers or video bloggers. They can become superstars but they can also be replaced easily. And when a bad buzz is arriving in the digital ecosystem, the impact is almost always the same:

At the end of 2020, a total of 617 million live streaming users were reported. In other words, 62% of Chinese internet users were using live streaming apps to make their purchases. It is not a surprise that live streamers are now considered to be celebrities.

The Viya scandal is the biggest fine delivered by Beijing to the entertainment sector and celebrity industry. The backlash was immediate on social media and e-commerce platforms, from which the celebrity is now banned. Chen He Di, a live streamer with 200K followers on Weibo stated that this ban could affect their only source of income. From now on, the luxury queen of live streaming will need time to get back on track.

In the past, a similar backlash happened to Chinese influencers. Zhu Chenhui was fined $10.2M USD and was banned from Weibo. Lin Shanshan, another notable live streamer was fined $4.3M USD and also banned from Weibo. The influencers world is evolving and exploding fast. In general, live streaming celebrities faced 1 to 2 years of backlash before going back to business.

The scandal will change durably the influencers and KOLs landscape in China. Who will take her place? Who will be the new leaders of influence in China? How do contact the right influencers and monitor their operations?

For a successful influencer campaign in China, it is mandatory to organize and manage a local team. Having a team located in Shanghai is key to selecting, contracting, and managing the right KOLs. At Gentlemen Marketing Agency (GMA), our dedicated team for influencers will come up with a curated list of influencers to avoid any bad buzz or drama. The selection is key, but the management is essential.

Find more about our Kols and live streaming services

You can contact us to receive our influencer campaigns in China with performance.