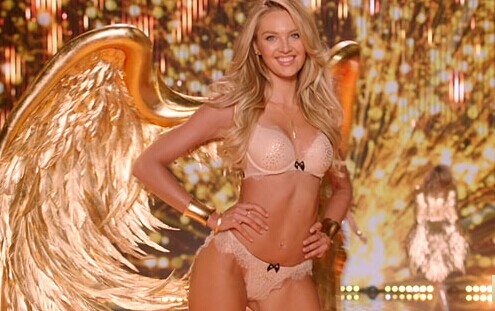 One of the most exciting lingerie big shows has just ended on December 13 2014 in London- Victoria’s Secret show. It has drawn millions of its worldwide fans’ attention to watch and participate in the year of the show. What’s on in China? Of cause, Chinese Victoria’s Secret’s fans would not miss this celebration, including all the media from traditional media channels and online social media platforms in China that have been supporting Victoria’s Secret this year.

So the question is – Is there any possibility that Victoria’s Secret gains the Chinese market in the future years? in earlier August this year, Victoria’s Secret has officially announced that it will dip its toes to the Chinese market in 2015 by opening a traditional full store in China and 9 of which global small testing stores will be opening in Chinese airports or department stores.

There is no doubt that the social media strategies Victoria’s Secret adopted have won many fans following on Facebook, Twitter, Pinterest, and many other platforms. Its utilizing social media interactions via the company’s official website has increased brand awareness and reputation year by year. And of cause, with offline promotion- the VS pink truck campaign has been greatly promoted its brand through the years in Both Colleges and Universities and it really has integrated the online and offline strategies of the campaign. According to the research, Victoria’s Secret was one of the Top 50 social media campaigns in 2013.

With this confidence, there is no question that Victoria’s Secret would go ahead with its expansion in China.

Chinese lingerie market has a potential growth for foreign brand.

Despite many lingerie brands and options for Chinese women, few international brands have taken their marketing strategy in China, especially in the lucrative category. However, the demand for lingerie brands for women is increasing. According to the research, sales of women’s lingerie products have been soaring in China since 2008, and the dollar amount has overtaken the US. This situation gives Victoria’s Secret a great opportunity to expand its market share as a luxury lingerie brand.

Secondly, the Chinese have a love affair with Western or European brands. For women, premium brands are what they looking for in order to satisfy their personal needs and cheap lingerie brands are no more their first choice.

Chinese social media is a powerful tool for fashion brands

With an increasing number of Chinese internet users. China has become the number one social media user and online media participates worldwide. The Chinese market is huge and with lot of opportunities for foreign brands with social media tools.

Secondly, the number of mobile device users boosts the development of the news media in China. Research has just revealed that more than 50% of mobile users read fashion news in their spare time via mobile phones and other mobile devices.

How many news media channels have been reported and discussed on those newly news media channels? Besides the traditional fashion magazine like Vogue China, other channels like fashion websites, fashion bloggers on social media platforms, and WeChat public information platforms are all greatly prompted Victoria’s Secret 2014. There are more man 10,000 comments for a post about Victoria’s secret on Sina Weibo. This is just an iceberg to show how Victoria’s Secret big show and the brand popular in China.

The future of Victoria’s secret in Chinese market has full of opportunities if they doing well on social media in China too.

The Chinese market is not like western countries’ market, although it has a great opportunity for Victoria’s secret, the market research for the brand is a must for the brand and for its sustainable development business in China. Creating the social media campaign will greatly help Victoria’s Secret to win Chinese customers.

To know more about the Chinese fashion market, please don’t hesitate to contact our Fashion China agency and click here for more information.